skip to main | skip to sidebar

Global English and the CLT 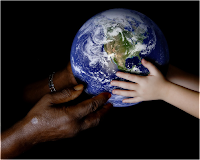 I am posting the first of a series of reflections that try to assess the Communicative Language Teaching approach in face of English as the new lingua franca.

From a historical perspective, the CLT was a reaction against the previous focus on drilling and the mastering of linguistic structures that once dominated the field of language teaching through the Audiolingual method. Different from other methodological attempts that also reacted against the previous mainstream methodologies and were in fashion in the 1970’s, as the Total Physical Response, the Silent Way, Suggestopedia, etc., the CLT was not a method in the strict sense of the word, but rather an approach; it was grounded on more solid and reliable views of language and learning that gave it the status of “a generally accepted norm in the field” of language teaching (Brown, 2001:42, emphasis added).

Similar to what had happened to the establishing of the Audiolingual method in the U.S., the CLT also counted on academic and governmental funding and support:

The rapid adoption and worldwide dissemination of the Communicative Approach also resulted from the fact that it quickly assumed the status of orthodoxy in British language teaching circles, receiving the sanction and support of leading applied linguists, language specialists, and publishers, as well as institutions such as the British Council.

Even thought the new approach represented back then an important step towards a more humanistic and better communicative practice in language classrooms – what explains its long life -, its principles should be now questioned in terms of the historical context and goals it had or still has. So far, no solid approach or methodology has yet replaced the CLT and we do not know if such will ever take place. It has even become a cliché the statement that we now live in a post-methods era. However, as the English language itself is seem from a different perspective today, the language teaching is expected to develop further as it has developed in the past.

Most principles espoused by the CLT are based on the reality of English as a Second Language and classes filled with international students from different linguistic and cultural backgrounds, who would then need to learn how to communicate with native speakers in English-speaking countries. When brought to the context of English as a Foreign Language, however, the same principles may be less appropriate or desirable. And the questioning goes even deeper if we now consider English as a global language or lingua franca. Many English teachers have taken for granted the idea of national varieties of English (American, British, etc.) and have never stopped to think about what may sound too obvious – what English is today.

As Rajagopalan reminds us,

Most of the familiar approaches to language teaching - (…) [including] communicative method (…) - have typically tended to take the identity of the language(s) in question as a given, as something more or less unproblematic.

Nowadays, the view of English as a national language spoken in certain countries is being reviewed and amplified in the light of the understanding of English as a lingua franca, a global language that allows communication among speakers from different national, cultural and linguistic backgrounds who have English as an additional language (Canagarajah, 2007). Therefore, English in this context does not belong to a limited geographical area or relate to certain national cultures. Also, the participation of a native speaker in the interaction is not a necessary condition for the use of “real” or “authentic” English.

The concept of English as a lingua franca challenges the core assumption of CLT that learners should be trained to speak to natives and deal successfully with the English-speaking culture. Explaining how culture in seem in CLT, Larsen-Freeman states that “Culture is the everyday lifestyle of people who use the language natively” (1986:134, emphasis added). This view assumes that non-natives should learn the target language and culture so that they can be understood and accepted by the natives only in the terms of the later, as if the non-native identity were less valuable. What is the culture behind a global language if not a host of different local cultures?

How much have we progressed in our field in terms of honoring the difference and particularity? Some authors have used the term imperialism to describe this perception of language and culture that still promotes a sort of colonial relationship between the center (represented in the concepts of target language and the native speaker) and the periphery (in the concepts of L1 and non-native). Therefore, unless language teachers reflect about and question these assumptions, we will be helping to perpetuate English as “the repository of the colonial spirit” (Rajagopalan, op. cit.:18).

An essential assumption of the CLT, the dichotomy of native versus non-native speakers and the virtual interlanguage that separates them, must be questioned as a valid way to approach language, given the reality of a multilingual world, where the so-called native speakers have become a minority and in many contexts the boundaries between languages are not so clear as we have imagined. In this scenario, the concept of nativeness is more likely to be useful to ideological than explanatory purposes. Or, it can only make sense when English is understood as a national language. Then, there are native speakers of American English, Jamaican English, British English and so far. But who are the native speakers of English as a lingua franca?

In his critique of CLT, Simon Andrewes points to the fact that authors “nowadays openly or tacitly agree that many of the principles of CLT methodology should be discreetly dropped or modified” (2005:5). Concerning the understanding of English as a global language, however, it should be noticed that some coursebooks have tried to add a global “flavor” using foreign accents in their audio materials or foreign names and faces on the print. However, the idea of the foreigner living in the Anglophone world continues to be almost always present.

See the second part of this discussion here.

Welcome to my blog. In case you feel like leaving a comment, don't be shy! Feel yourself at home!